On the 20th, 21st and 22nd October 2017, a new edition of the Brussels Fashion Days took place in Brussels. This is the most important event in the fashion sector held every year in Belgium. This Fashion Days gathered a wide audience in the Belgian capital, offering them a complete program of activities which aimed to promote fashion in Belgium between the sector’s professionals and the end consumers.

In this event’s sixth edition, Spain has been the guest country for the first time. Fashion Shows with renowned designers, emerging designers and fashion schools, pop-up stores, workshops and exhibitions are some of the activities that have taken place during the Fashion days in the most emblematic venues of the capital.

The Official Spanish Chamber of Commerce in Belgium and Luxembourg will be the entitled institution to manage Spanish participation at the Fashion Days. It also counts with the collaboration of the Spanish Embassy in Belgium and Marca España.

On Thursday 19th October, the Spanish Ambassador in Belgium, HE Mrs. Cecilia Yuste Rojas, organized a welcome reception for the Spanish delegation participating in the DS Brussels Fashion Days – Spanish Edition. In this way, the Spanish Embassy thanked the designers and Spanish fashion professionals their collaboration in the promotion of Marca España abroad in such an important sector for the Spanish economy. 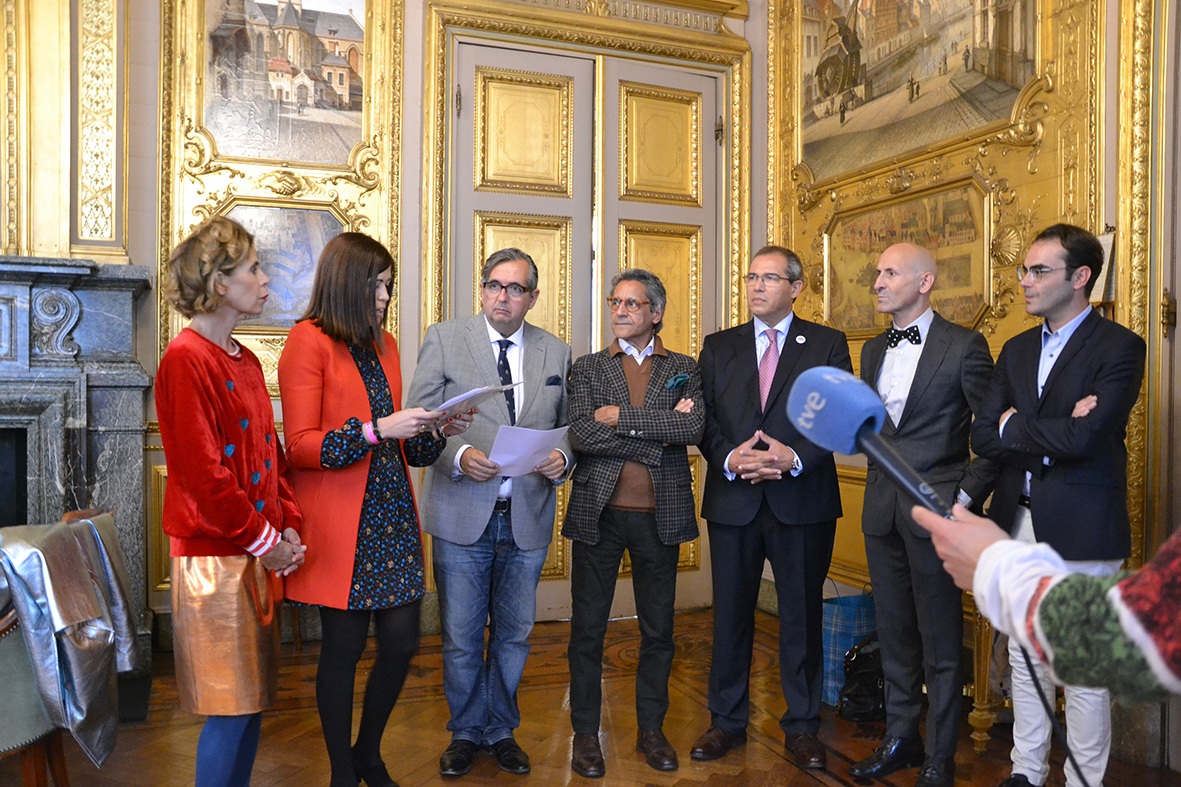 Later, at 18.00h the official inauguration of the DS Brussels Fashion Days – Spanish Edition took place at Galerie Horta, where the pop- up space was located with the representation of 5 Spanish fashion brands. Socku with their fun and colorful socks, Alfredo Arranz and his handmade decorated silk shawls, Osö Design’s made in Spain clothes, Cache.Toi and their fur capuches and the sustainable fashion from The IOU Project. In addition, in the same space we could also find the exhibition “Fashionable vegetables. Designs of the Catwalk Ciudad de Calahorra (La Rioja)”. This was an exhibition where we can find the most representative dresses from designers such as Alexander McQueen, Balenciaga, Chanel or Elie Saab, but made with vegetables from the vegetable garden from La Rioja. Finally, in Galerie Horta D’icanno and ESNE exhibited a sample of their designs. The inauguration counted on the presence of Agatha Ruiz de la Prada, Miguel Marinero and Modesto Lomba. The mentioned space stayed open during the whole weekend. 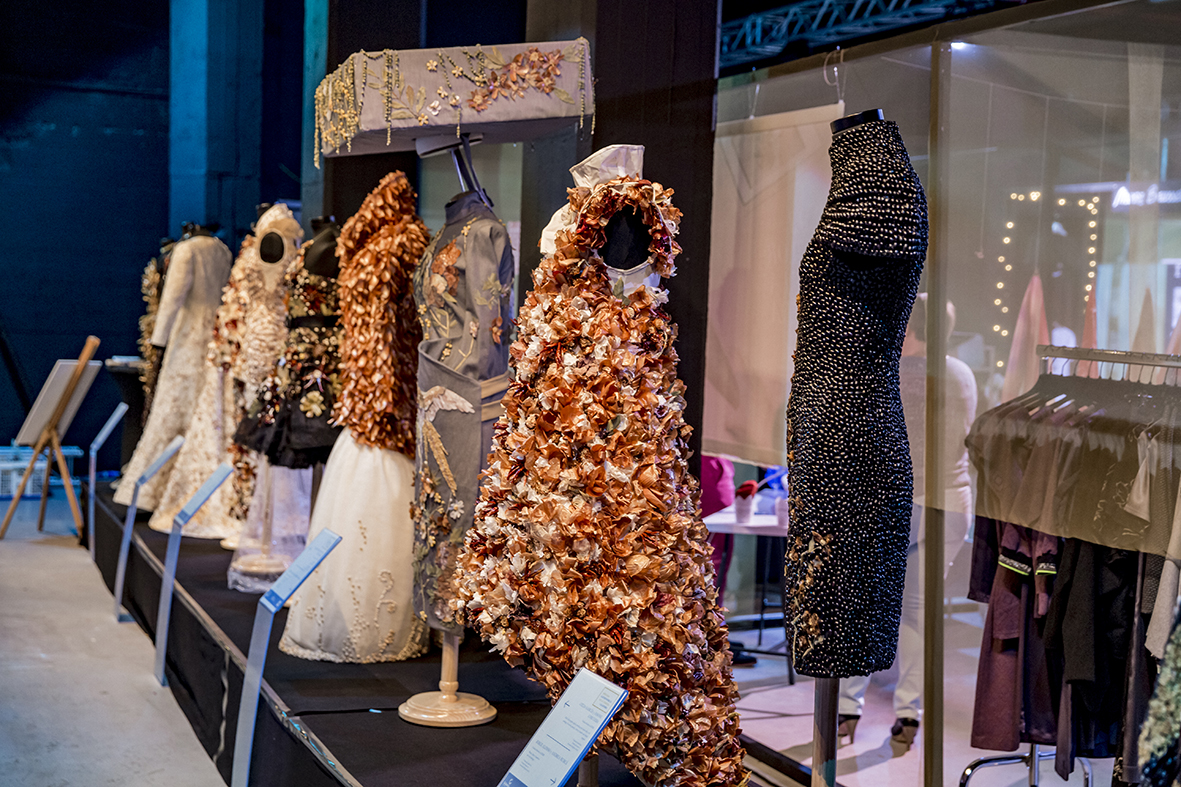 During the night, at 21.30h the Opening Fashion Show took place in Galerie Ravenstein with the participation of Spanish and Belgian and Spanish fashion designers. From the Spanish side, the designs with pure lines created by Eder Aurre shined in a catwalk full of color and finesse. Victor Nouman brought men’s fashion to the catwalk with designs that combine art, architecture and fashion. Adriana Cagigas, alumni at the fashion design school ESNE, presented the collection Timeless from the brand she created herself: Threeones. Débora Velasquez showed her long dresses and D’icanno, showed her most responsible and solidary designs. All of them maintained high standards during the first Fashion Show in the DS Brussels Fashion Days – Spanish Edition. 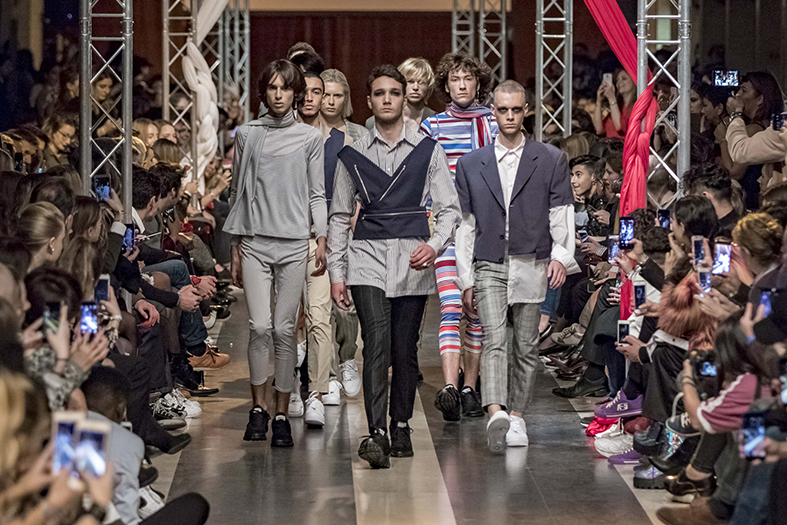 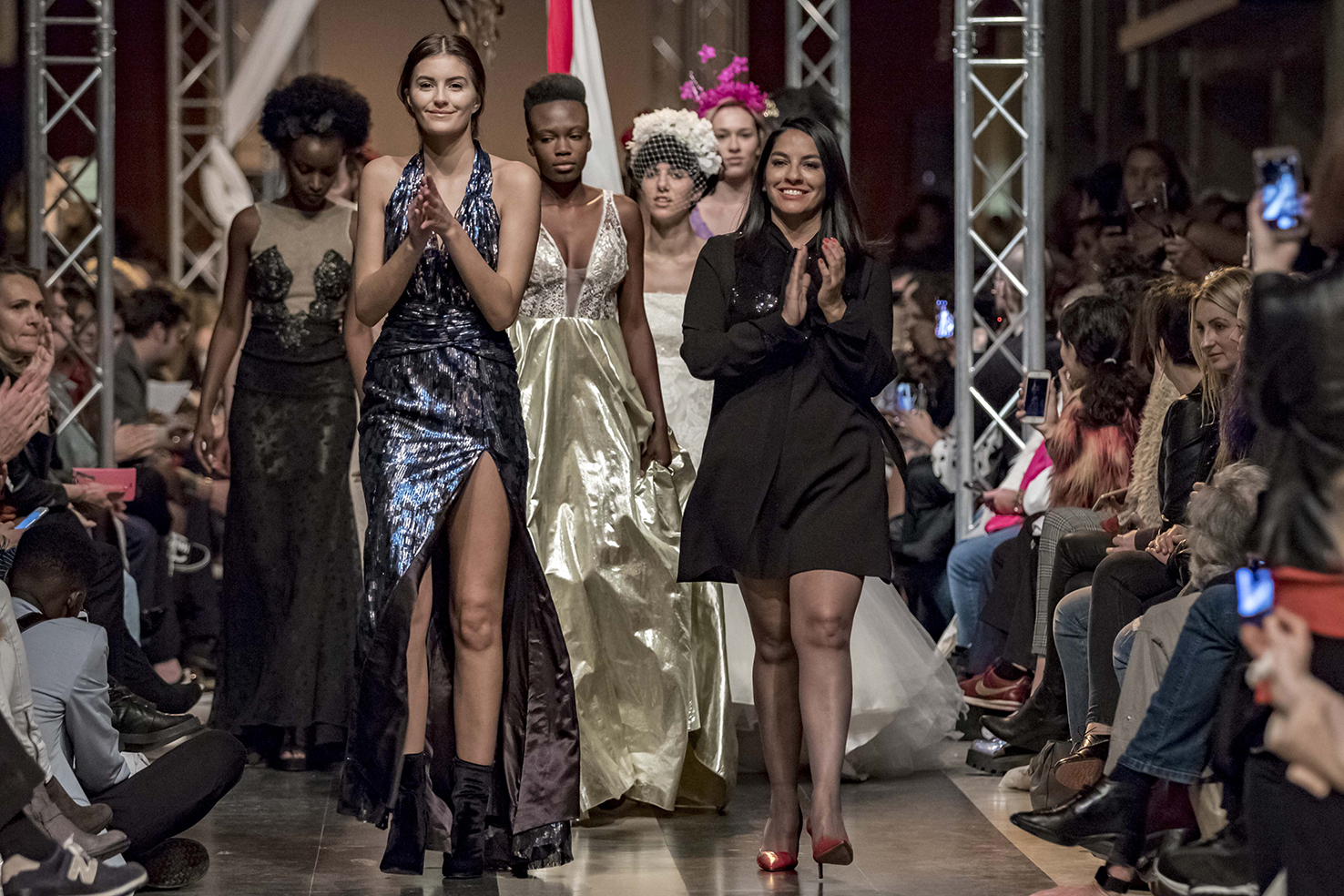 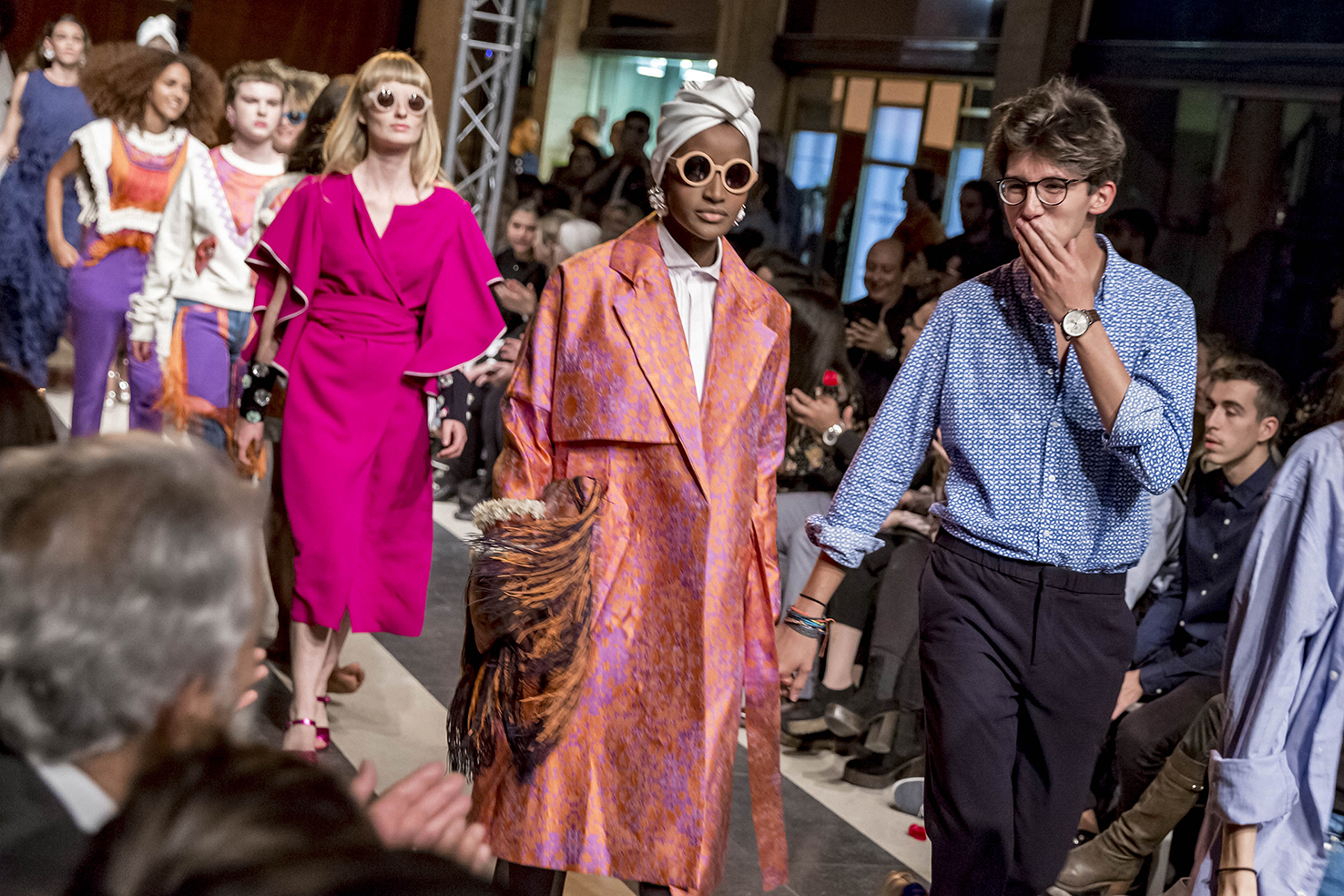 During the second day of the DS Brussels Fashion Days – Spanish Edition, several events took place. At 19.00h, the Spanish Chamber organized at the Hotel NH Collection Brussels Grand Sablon, in collaboration with Hispania Brussels, a Fashion Dinner as a tribute to Spanish fashion. The dinner was elaborated by the chef Marcos Morán, owner of a Michelin Star and three Soles Repsol. In addition, the attendees could enjoy Spanish wine offered by Bodegas Yuntero, and they toasted with cava Freixenet.

There were several speeches along the Fashion Dinner. First, Juan Rodríguez Villa, President of the Official Spanish Chamber of Commerce delivered welcome remarks and thanked the presence of all the attendees, specially all the designers and fashion entrepreneurs that had traveled to the Belgian capital to celebrate the internationalization of Spanish Fashion. Then, Modesto Lomba, President of ACME (Asociación de Creadores de Moda de España) – association to which belong all designers from the upcoming Fashion Show – took the floor. He thanked the effort from all those professionals that fight day to day for the expansion of Spanish Fashion and help every day to make our fashion more important and acknowledged abroad. 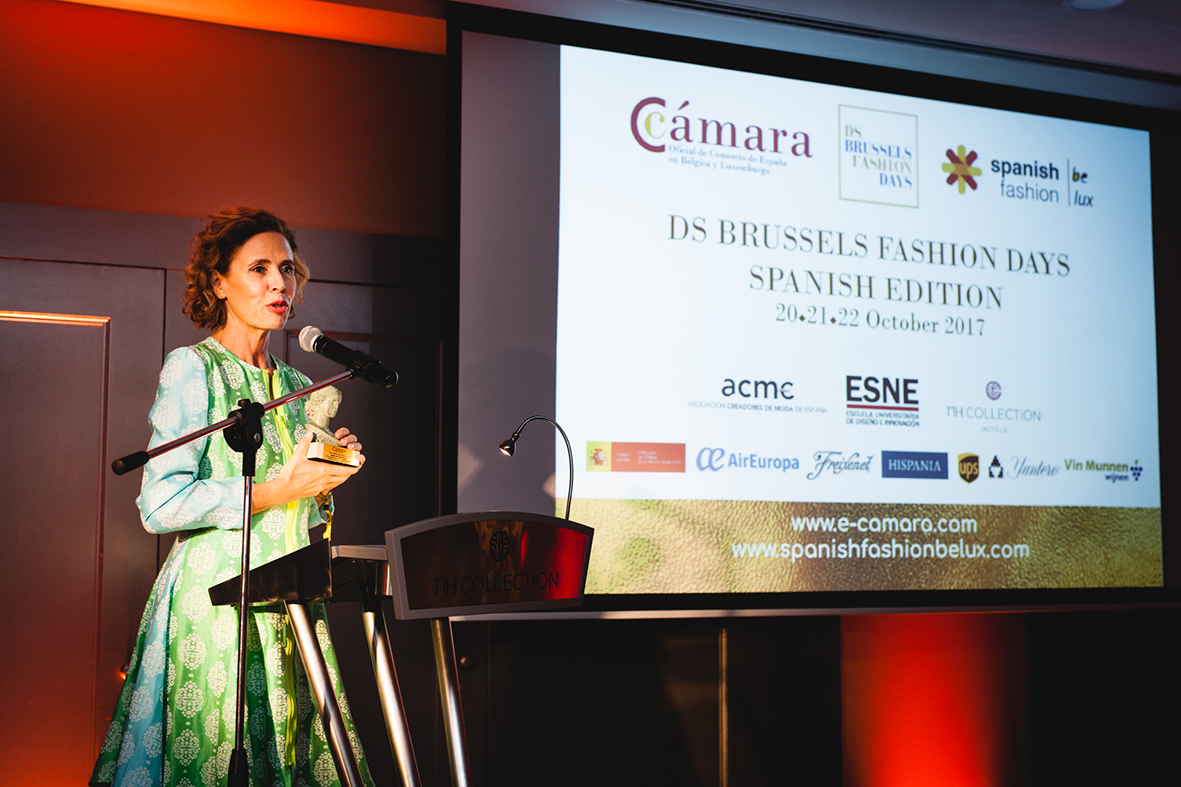 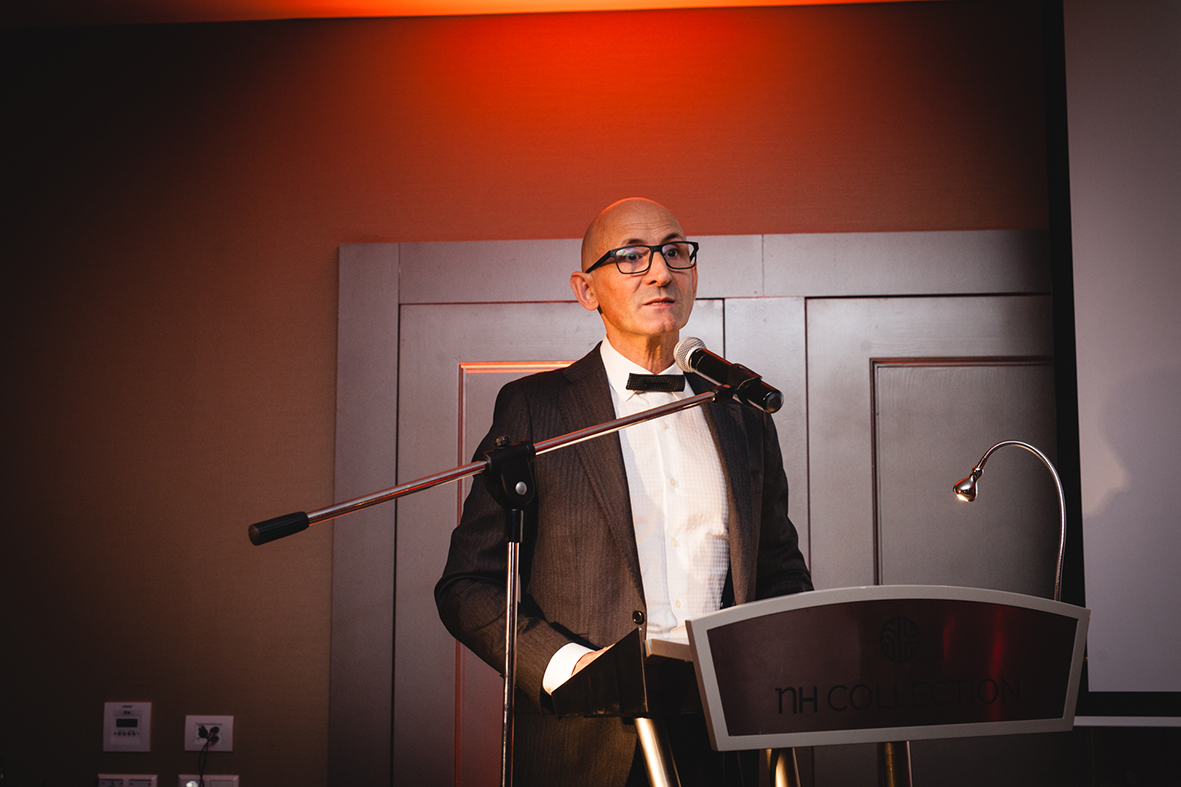 After that, the president of the Spanish Chamber awarded Agatha Ruiz de la Prada with a distinction for her amazing work in the internationalization of Spanish Fashion. He also congratulated her for receiving the National Award of Fashion Design in Spain. Afterwards, Agatha took the stand and showed her enthusiasm about the awards and showed her happiness because Spanish fashion is more and more well-known in an international level. Finally, Jérémy De Lemos, Director General at the Hotel NH Collection Grand Sablon, said a closing Word and showed his happiness because NH was taking part of such an important moment for the Spanish Fashion.

After the Fashion Dinner, the attendees headed to the Great Fashion Show that took place in Galerie Ravenstein. Agatha Ruiz de la Prada was in charge of opening the Fashion Show, filling it with energy and color. Afterwards, Leyre Valiente, presented her collection Chaos, her third collection inspired in the French illustrator Jean Giraud Moebius’ work, with a flawless dress collection. On his side, Ion Fiz added some ethnical touch to the catwalk, and Miguel Marinero was in charge of closing the Spanish participation with artisan prêt-à-porter designs, where leather, fur and paillettes were the main protagonists. 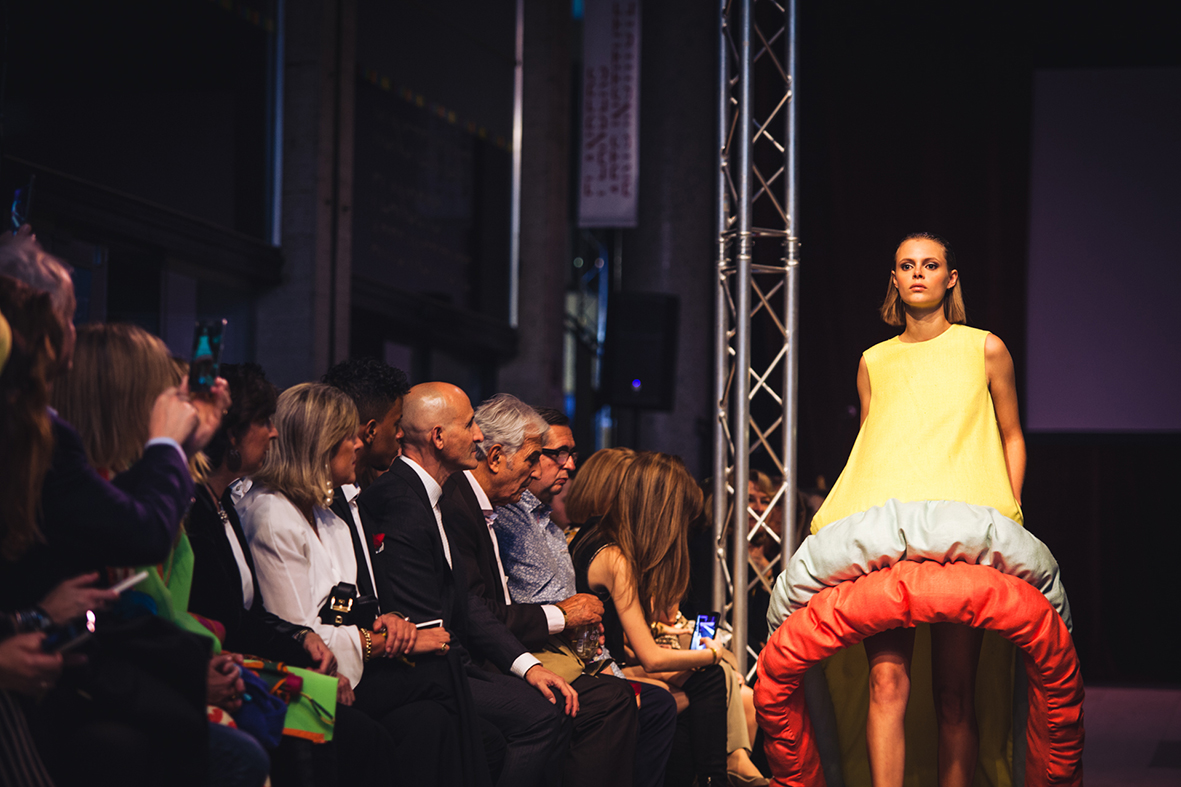 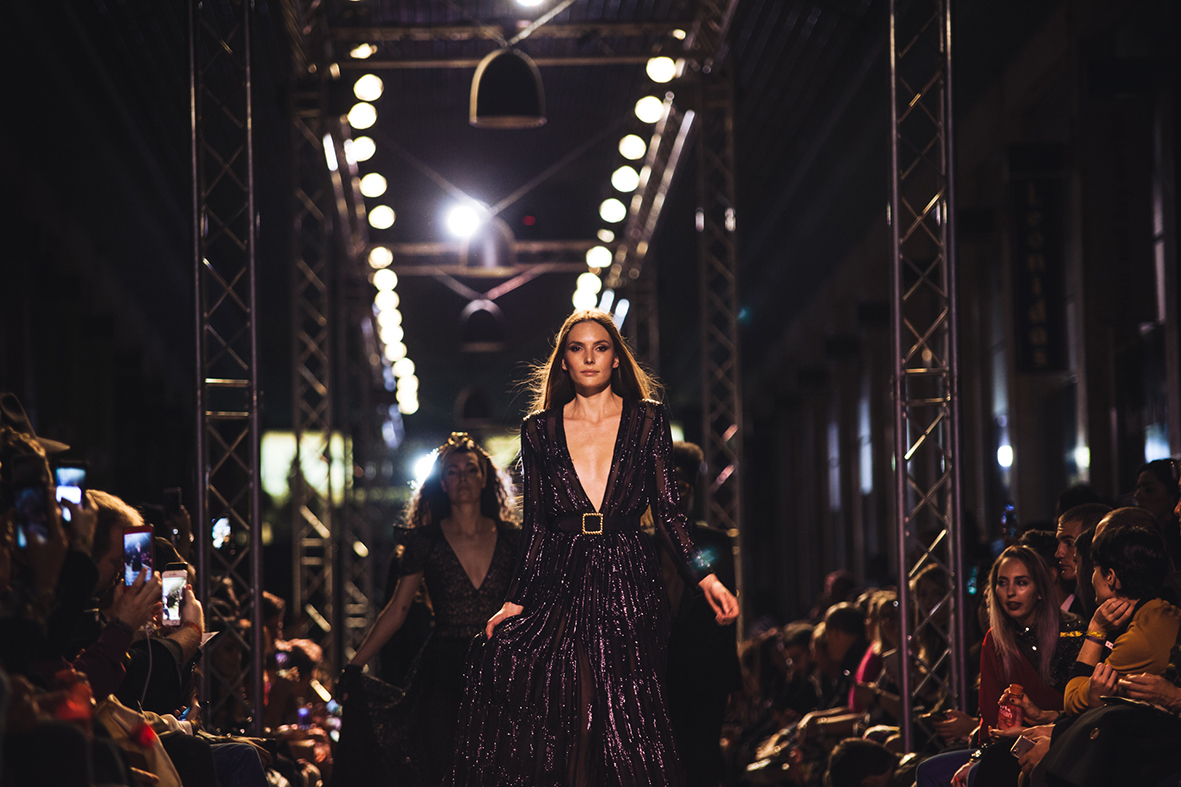 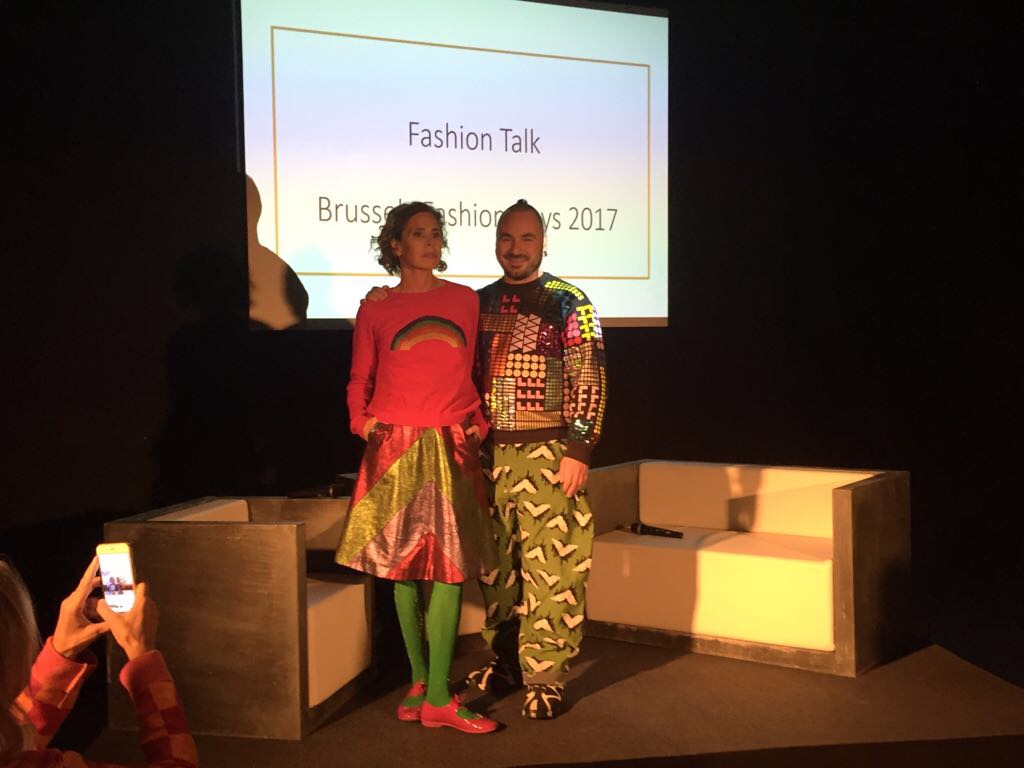 During the last day of the DS Brussels Fashion Days – Spanish Edition, Agatha Ruiz de la Prada, together with Jean Paul Lespagnard took part in a Fashion Talk at Galerie Horta, where both designers shared their perspectives about the fashion universe and the creativity in a comfortable and relaxed environment. 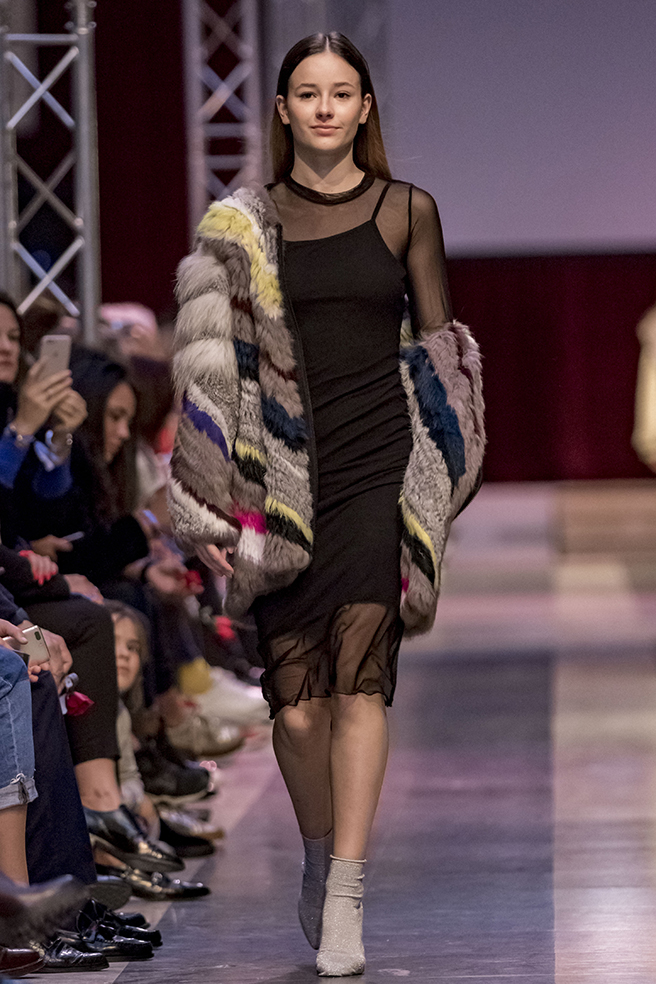 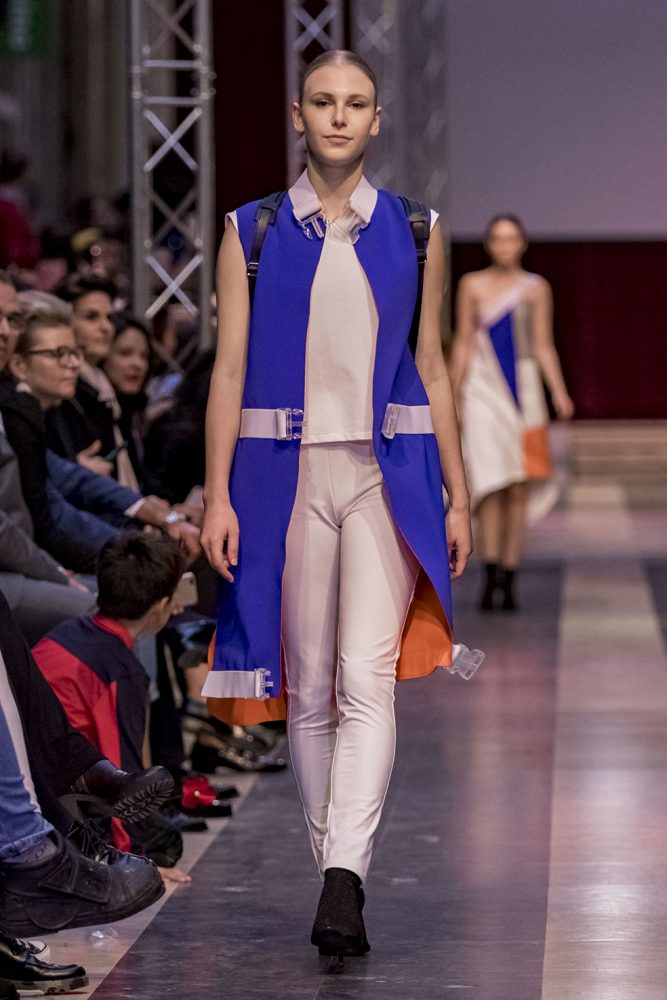 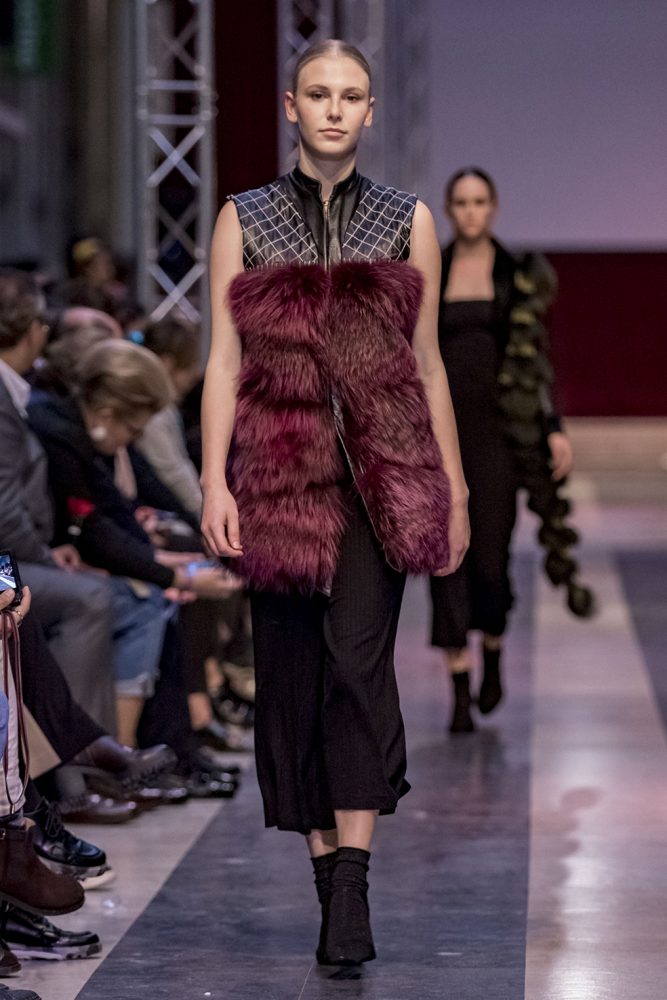